New Memorial Dedicated to the U.S. Army in WWII Was Unveiled in the Czech Republic 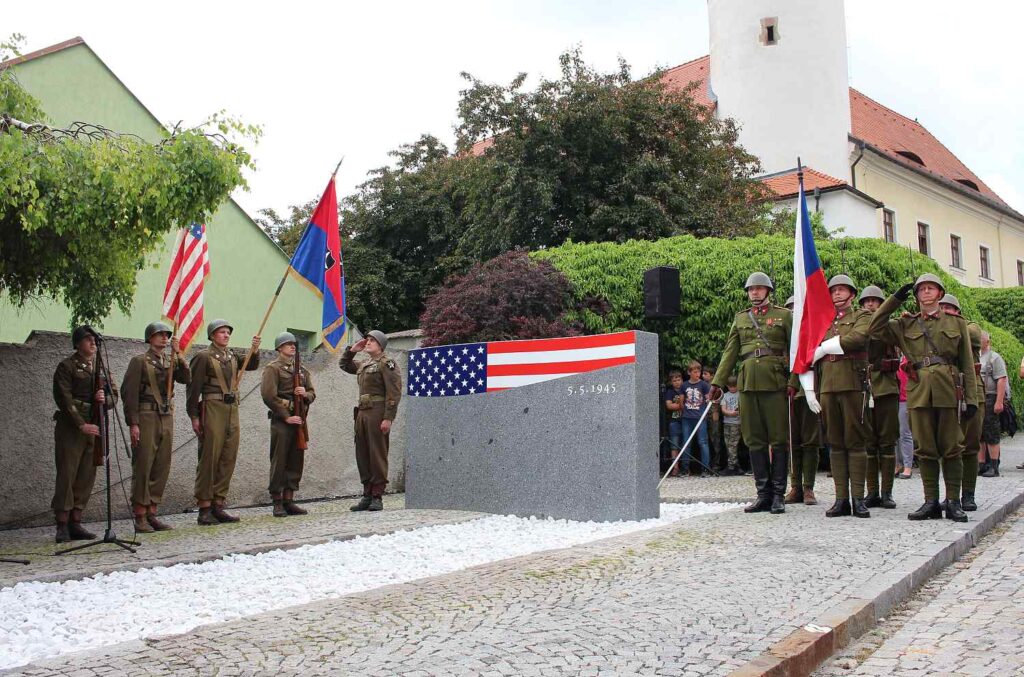 On June 6, 2021 we took part in the unveiling of the new memorial in the town of Domažlice, Czech Republic. The memorial is honoring the U.S. soldiers of the 2nd Infantry Division who liberated the town on May 5, 1945.Four soldiers of the 2nd Infantry Division who took part in liberation of Domažlice in May 1945 – Lt. Col. Matt Konop (in memoriam), 1st Lt. Herman Geist, 1st Lt. Robert Gilbert and T/Sgt. James Duncan were granted the honorary citizenship of the town of Domažlice in 2016. It was their families in the United States who came together to raise funds to build a new memorial. They have collected a third of the total costs within the collection in the USA and the rest was financed by the town of Domažlice to complete the memorial.The new memorial was created by a sculptor Václav Fiala who decided to create the memorial with two parts. The first part is a granite monolith with the American and Czech flags, dated 5 May 1945 and with the inscription “Thank You!”. The second part is a pair of stone benches and a table with a modeled traditional Chod hat, an American military helmet and an engraved inscription “We came not to take anything of yours. We came with an idea: Freedom.” The names of the four veterans of the 2nd Infantry Division are engraved on the memorial as well.The ceremonial unveiling of the new memorial became a significant event and we were honored to take part with our colour guard representing the 2nd Infantry Division.Many thanks to the representatives of Domažlice and the families of veterans for honoring and preserving our common American and Czech history!