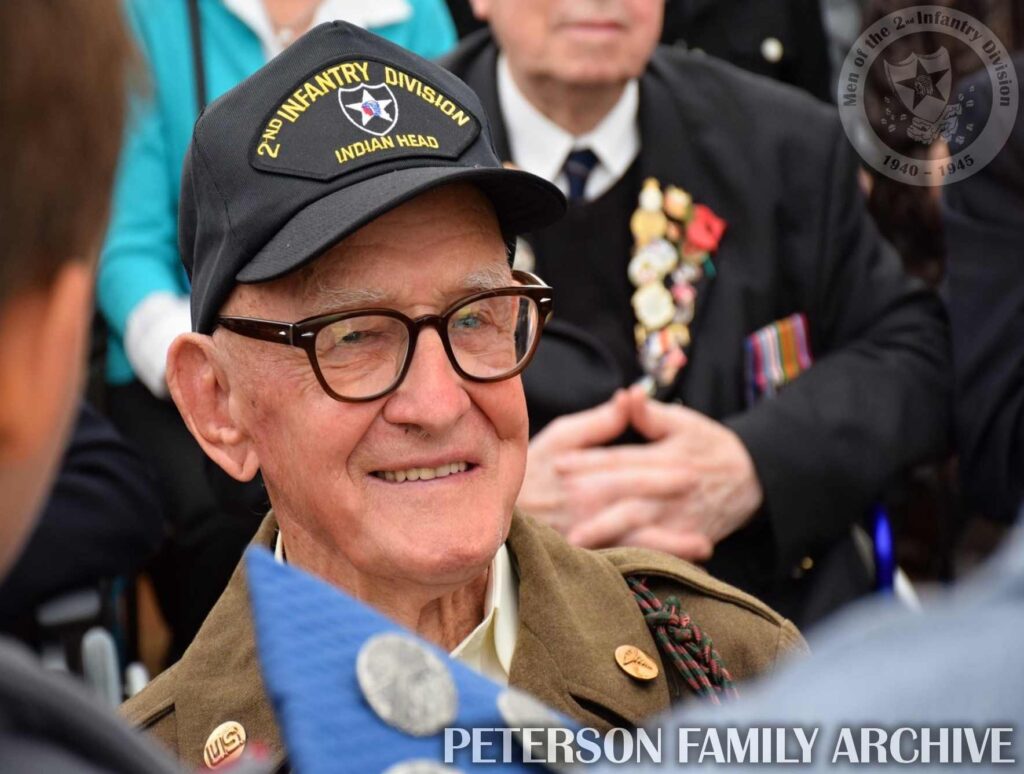 “One day we treated 125 wounded in 4 hours. Once we had that many casualties, the aid men treated anybody they could. Sometimes our medics would go with the red flag and sometimes they were shot at anyway… When we went through Trévières, France, I walked right by the body of one of my best friends. His name was Henry Nuss, he was shot in the head,” remembered T/3 Oscar C. Peterson, a combat medic in the 38th Infantry Regiment, 2nd Infantry Division.

Oscar C. Peterson was born on October 10, 1921 on a family homestead in Forks, Washington. He was sports talented and he loved mountains. When Oscar was young he often spent summers at the Sol Duc Hot Springs with his mother, who had become a guide in the Olympic Mountains. As a teenager Oscar was often in charge of their family farm especially after his older brother Ivan left for college.

Oscar graduated from Quillayute High School in 1940 and the following year he worked for the U.S. Forest Service to pay for his college studies and to help his brother pay for his. In 1942 Oscar attended the ROTC program at Washington State University. He also hoped to become a veterinarian but his college studies were interrupted by war and in September 1942 Oscar was inducted into the Army.

After completing basic training at Camp Bullis, Oscar was assigned to the 2nd Infantry Division. Soon after that the Division was moved to Camp McCoy, Wisconsin to attend its winter training. Oscar learned to ski and loved skiing so much that he went out to the slopes and skied just for fun even during his days off.

“I had not asked to be a medic and I wasn’t selected for this job until after basic training. The army needed medics so I was chosen. What I really wanted to be a part of was the 10th Mountain Division. You had to be chosen for that too but my recommendations weren’t processed in time, so before I knew it, I was heading off to Ireland and Operation Overlord,” Oscar remembered.

On June 8, 1944 Oscar and his unit landed in Normandy where, as a combat medic, Oscar witnessed some of the most horrific fighting. In the next 336 days in combat out of the original 32 medics in Oscar’s unit, 2 were killed, 2 were taken captive, and 25 were wounded. Oscar was one of three men in his unit who dodged death and wounds.

After the war, Oscar returned to Forks, he met the love of his life, Mrs. Wilma May Gilbert and they have three children. Mr. Oscar C. Peterson passed away on October 2, 2018 at the age of 96.
Thank you so much for your service, Mr. Oscar C. Peterson! We will never forget you!

Many thanks to Glynda Peterson Schaad who decided to share with us the story of her father, Oscar C. Peterson.