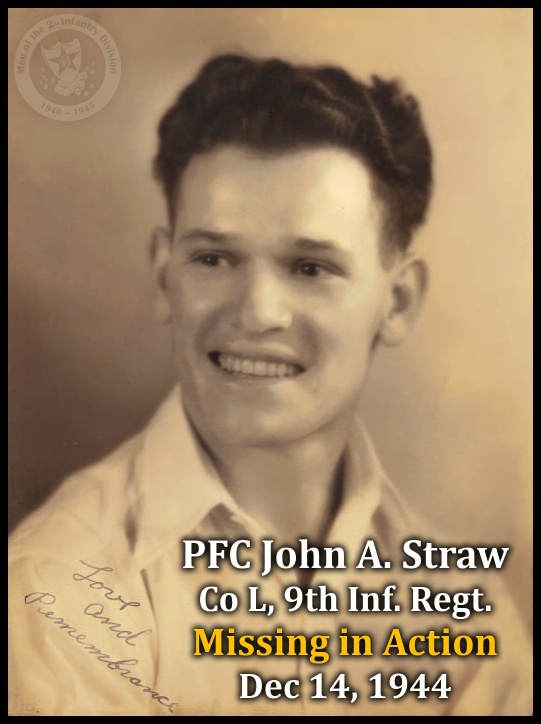 December 14, 1944, the second day of the attack of the 9th Infantry Regiment, 2nd Infantry Division at the fortified crossroads at Wahlerscheid near Rocherath-Krinkelt. A 35-year-old PFC John A. Straw, a member of Company L, is carefully crawling forward in the deep snow full of mines. Just a moment later PFC John Straw became missing in action but he is never forgotten. We can learn more about the course of events thanks to the official Silver Star commendation:

“PFC Straw voluntarily attempted to knock out the pillbox with his bazooka. Working his way over open ground he maneuvered within firing range of the emplacement. As private first class Straw raised himself to fire the bazooka, the enemy opened fire and wounded him. Although members of the leading rifle platoon could see that PFC Straw was stricken, attempts to reach him proved futile due to the extremely vicious fire laid down by the enemy, and further attempt was denied as friendly heavy artillery fire and bombardment by air force caused troops to withdraw from the area. PFC Straw´s courage and devotion to duty were an inspiration to every officer and enlisted man in his organization. The gallantry and devotion to duty and disregard to personal safety far above and beyond the call of duty displayed by this enlisted man reflect highest honor upon himself and the armed forces of the United States.”

The last official attempts to find the remains of PFC John Straw took place at Wahlerscheid Crossroads in 2006-2007 and most recently in 2011. Unfortunately, without any results. It is believed that his body was recovered after the battle and buried as unknown in a military cemetery. PFC John Straw is the first of five members of the 9th Infantry Regiment who are still missing in action from the Battle of Heartbreak Crossroads that took place from December 13 to 16, 1944.

We honor your memory and will never forget your sacrifice!!

Special thanks belong to the family of PFC John Straw for sharing the story and photos of their beloved John.