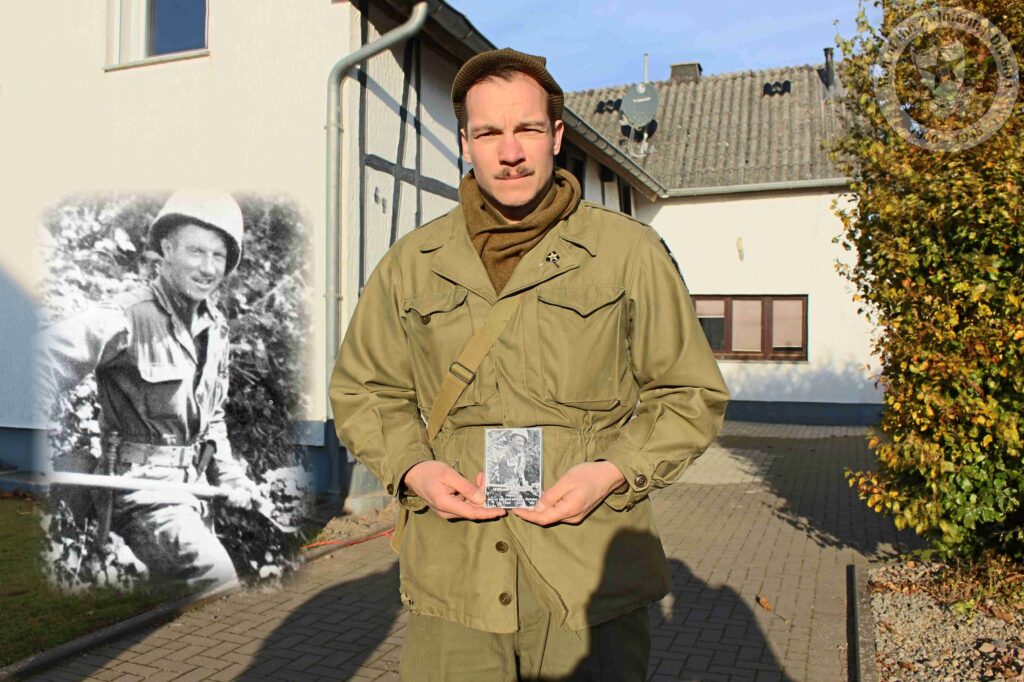 On February 11, 1945 men of Company H, 9th Infantry Regiment, were affected by tragic loss of their highly respected commander, Capt. William B. Higgins. He was 30 years old.

“We were near Schleiden, Germany, at the time of his death, and we had our Company Command Post set up in a house. We had not been receiving much enemy fire up to the 11th of February. On this morning, about 10:55, two shells went over the house, landing to our rear. The captain was changing his socks at the time, and the 1st sergeant was sitting at his desk in the same room. The phone rang, and it was the colonel seeking information regarding the shells. The 1st sergeant got up, went into a rear room, and looked out the window to see where the shells were bursting. While the 1st sergeant was standing there, a fatal shell came in, hitting the side of the house and bursting right into the Command Post room, throwing steel and dirt all over the room. Capt. Higgins died instantly, and the 1st sergeant received many slight wounds when steel flew through the open door towards him.” An unknown member of Company H in his letter addressed to Higgins family.

Another member of Company H, Sgt. Glynn G. Raby still remembers that day: “The small village was Bronsfeld, close to Schleiden, Germany. I was not near the house but heard that Capt. Higgins was KIA and that our Mess Sgt. James Wicker, was also in the house and badly wounded. He never returned to us. I did not know about the 1st Sgt. but he was probably there. I do know that he got three Purple Heart Medals ‘wounded but remained on duty’. One in Normandy, the next at Brest.”

Sgt. Glynn Raby also remembers the first time he met Capt. Higgins: “Our first Company Commander was Captain Thomas Birch who had been with the unit since 1940. Capt. Birch was wounded in late July 1944 and when he returned, Capt. William Higgins was our new Company Commander and Capt. Birch was assigned to HQ Company, 2nd Battalion. My first encounter with Capt. Higgins was outside Brest, in August. I was assisting the Communications Sgt. Douglas Thomas, when we got in our holes due to incoming fire. A mortar shell landed on Sgt. Thomas and killed him immediately. That was the closest I had been to a KIA and I was probably in shock. Capt. Higgins came up, and asked if I was OK. I said yes, but he probably knew differently. He asked if I wanted to go to the rear for 2 or 3 days, and I declined. That made a good impression on me of him. I believe most officers would not have been so considerate. As you know, after Brest, we moved to the Schnee Eifel ‘mountains’ and spent 2+ months there. We built log gun emplacements, living quarters and even a ‘cordouroy’ road into the CP area. Many times we found Capt. Higgins with us wielding a shovel, saw or other tool. We had a great respect for him and it was comforting to us to know that he was in charge. We were saddened when he was killed.“

Sgt. Glynn Raby introduces also the tragic fate of Capt. Higgins family: “Capt. Higgins was married and they had a baby boy about 18 months old. Years later, we started having Company H annual reunions (1993). Capt. Higgins´s wife, Mrs. Dorothy Higgins, had never re-married and asked for a note to be placed in the 2nd Indiahead Division Association´s newsletter asking to be contacted by any that served with her husband. Several of us contacted her and she came to our 1994 reunion and several more afterwards. Dorothy was a retired school teacher and we all enjoyed getting to know her. We were saddened to learn that their son became a ‘copter’ pilot and was KIA in Vietnam.“

1st Lt. William P. Higgins, the son of Capt. William B. Higgins, was killed in action on Dec 28, 1969 in Quảng Nam province, Vietnam, when his helicopter accidentally crashed into Hai-Van Pass. Mrs. Dorothy Higgins lost her husband and son. She stayed alone and passed away in 2002.

On October 29, 2021 our project team visited Bronsfeld where we met our new friends and colleagues Frederik Schrick and Sandro Hammermüller. Frederik successfully identified the former Command Post building thanks to the memories and a photo provided by a Company H´s veteran, Sgt. Glynn G. Raby.

In this picture a member of our project team, Lukas Netrh, is holding a photo of Capt. William B. Higgins in front of the house, where this young and well respected leader lost his life. It happened in a more distant part of the house. By coincidence, Frederik’s grandfather worked as a carpenter and during the 1950s he was renovating this part of the house, which was still damaged at that time.

Captain William B. Higgins, we honor your memory and will never forget your sacrifice!!

Our special thanks belong to our friends and colleagues: Sgt. Glynn G. Raby, Frederik Schrick and Sandro Hammermüller. Thank you for your support and help!

Thanks to our cooperation with Frederik and his historical group, you can look forward to more photos, reports and field surveys in the Schleiden area and from the Rocherath-Krinkelt battlefield.