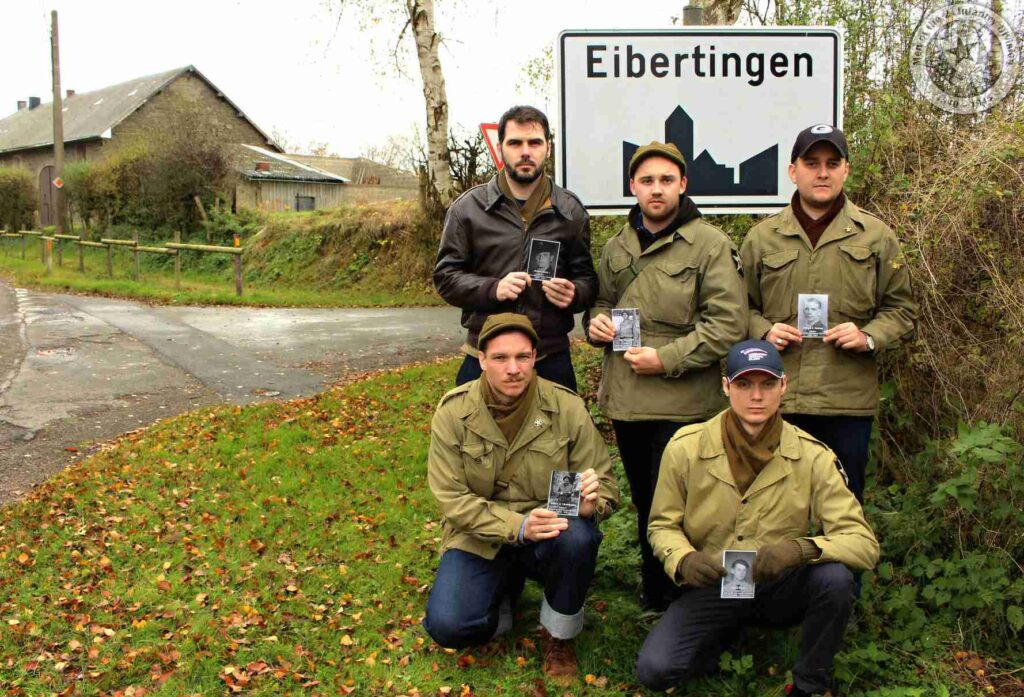 On January 19, 1945, the 23rd Regimental Combat Team launched a final attack under the most indescribably adverse weather conditions, toward Iveldingen and the village of Eibertingen, Belgium. After crossing the ridge of Rohr Busch, strong resistance was expected from members of the German 3rd Fallschirmjäger-Division, however, the first village Iveldingen was captured without noticeable resistance. A completely different situation occurred in the case of nearby Eibertingen, where the men of Company E and Company G encountered well-prepared positions of the German Fallschirmjägers.

“Having secured the houses on the edge of town, in which were found machine guns and ammunition still in position in windows, an attempt was made to advance farther into town. The result was an immediate and vicious counterattack. The counterattack was stopped by the tanks and riflemen with no losses to either. Now began the slow and painful process of attempting to drive a stubborn enemy out of individual houses in house-to-house fighting,” stated Capt. John S. Stephens, a Company G Commander.

After a half-hour of savage fighting and furious fire from the houses on both sides, the men of both attacking companies were rapidly running low on ammunition. As Capt. Stephens remembered: “Ammunition shortage had become so critical that .30 cal ammunition from the machine guns on the tanks was being removed from the belts and loaded in M-1 rifle clips and BAR magazines.“

By 1800 hours all houses in Eibertingen had been cleared and after 6 days of fierce fighting in the so-called battle for the “Ondenval-Iveldingen Pass” when men of the 23rd Regimental Combat Team fought not only with enemy, but also with blizzards, minefields and bitter cold, the pass was finally secured and permit the passage of the 7th Armored Division which attacked and recaptured the town of St. Vith.

At the end of October 2021, our project team visited and documented the battlefield at Ondenval-Iveldingen Pass. We also honored the memory of 5 members of the 23rd Infantry Regiment who were killed in action in Eibertingen on January 19, 1945 and in the following days.

We honor your memory and will never forget!!