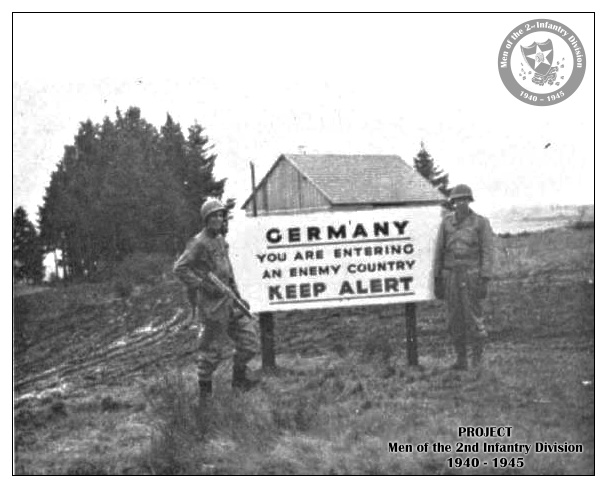 “A big white signboard with glaring black letters told us what we were near. ‘You are now entering Germany, an enemy country. Be on the alert.’ I looked at my watch. It was 11:15 on the morning of October 3, 1944. We were entering the country at a point approximately twelve miles east of St. Vith, Belgium, in the Schnee-Eifel forest.” stated Capt. Charles B. MacDonald, commander of Company I, 23rd Infantry Regiment. In: MacDonald (1999, p.7)

On October 4, 1944 the 2nd Infantry Division had completed the relief of the 4th Infantry Division and 28th Infantry Division´s units and took over the defense of an approximately 27-mile sector along the Siegfried Line east of St. Vith. Terrain of Schnee-Eifel ridge was extremely rough with steep hills, sharp ravines and dense woods. The front line put strongly the defenders at a disadvantage in many ways. The 2nd Infantry Division had to hold extremely large sector and it was not possible to maintain a defensive line that could be continously observed. For example a single rifle company was usually ordered to defend the sector which would ordinarily have been defended by a whole regiment. It caused the creation of wide gaps (sometimes more then a mile large) between the outposts of the Division´s defensive line. Thanks to these gaps the small enemy patrols were able to infiltrate the rear and reach the Division´s command posts without much troubles. As a result of this situation all positions were constructed as independant islands of resistance which were prepared for all around defense.

“Your 3d Platoon on the right has it worst. They’re completely exposed. Can’t even raise their heads out of their holes in daylight without some goddamned Kraut taking a shot at them. We can’t contact them by runner except at night. There’s a two-hundred yard gap on their right…which ain’t good, of course,” described the situation 1st Lieutenant of Company K, 28th Infantry Division during a brief meeting with Capt. Charles B. MacDonald. In: MacDonald (1999, p.11) A long ridge in front of the Division´s defensive line was occupied by Germans. They had perfect observation of the Division´s outposts on many parts of the front line. In these exposed positions men of the 2nd Infantry Division had to be hidden at the bottom of their fox holes during most of the day. As usual October and November in 1944 were rainy months with cold weather and so cases of non-battle casualties (not fatal) like diseases or trench foot significantly increased.

For the next 68 days from October 4 to December 11, 1944 the men played their tough but important role at the Siegfried Line in one of the less known part of the 2nd Infantry Division´s history. How did men of the 2nd ID manage to build their defensive line in these disadvantages positions? What was their life on the Siegfried Line and what kind of danger awaited them? Stay with us and learn more in our future posts.