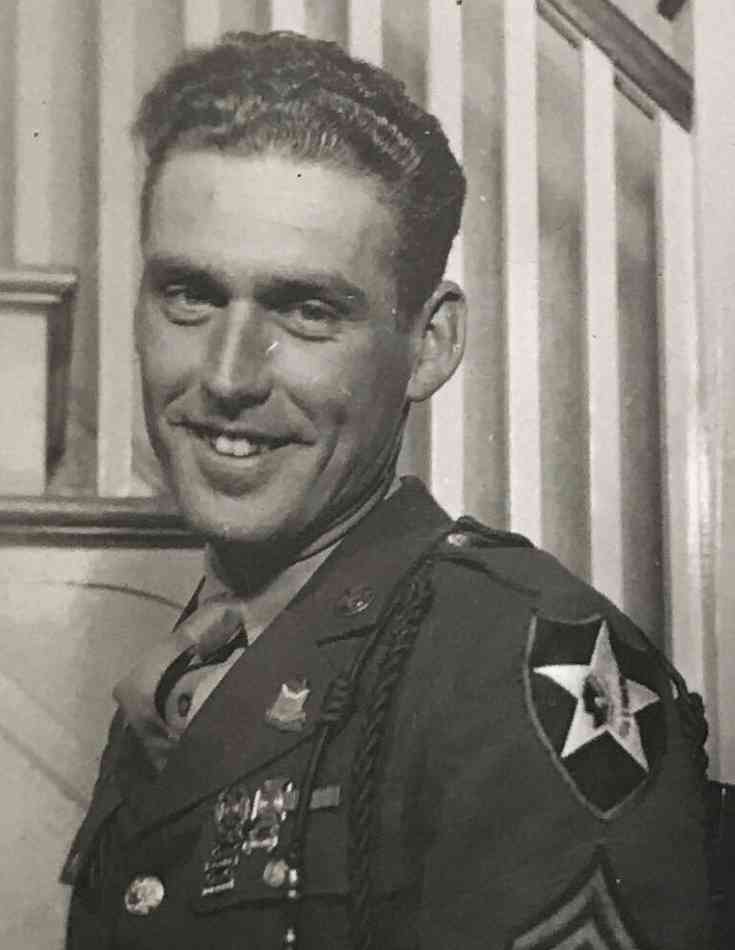 Edwin Flexer was born on July 3, 1917 in Philadelphia, state Pennsylvania. He had six siblings (three brothers and three sisters). Although Edwin lived in the city, he loved horses and spent a lot of time at a stable where he took care of horses and rode horses a lot. Edwin enlisted in the Army on January 27, 1941 and prior to his transfer to the 2nd Infantry Division, he served in a cavalry unit. Edwin had one great dream! He was going to move with his wife Agnes and son Ned to Texas, when he comes back from the war. He wanted to live on a ranch and take care of horses.

In July 1944, S/Sgt. Edwin Flexer was already fighting in Normandy with his Company L. Edwin served as a company radio operator and was awarded the Bronze Star for his action on July 3, 1944 when he managed to repair unit’s radio and maintain contact with his division while under fire. On August 1, 38th Infantry Regiment was attacking near Souleuvre river in direction of the city Vire, France. Ned Flexer was 9 months old when his father was killed in action on this day. S/Sgt. Edwin Flexer was 27 years old.

“My mother was a widow at 26 with a 9 month old and used, what I remember was, the $5000.00 insurance money from the government and put it on a row house in Philadelphia and 3 of her sisters and their husbands and kids moved in with us, 16 people in a 5 bedroom house for the first 10 years of my life. My mom remarried when I was 21 after I finished college and seminary. I didn’t understand why I didn’t have a father for many years. Now I am 75 years old and I think about him every day.” wrote Ned Flexer.

We are often thankful to the men, who brought us our freedom but we should commemorate also their families: parents, wives, children and siblings who all lost their beloved ones because their sacrifice and pain are hidden in their hearts forever.

Thank you family Flexer and S/Sgt. Edwin B. Flexer. We will never forget your sacrifice!