S/Sgt. Samuel R. Hodges and the Battle for the Twin Villages 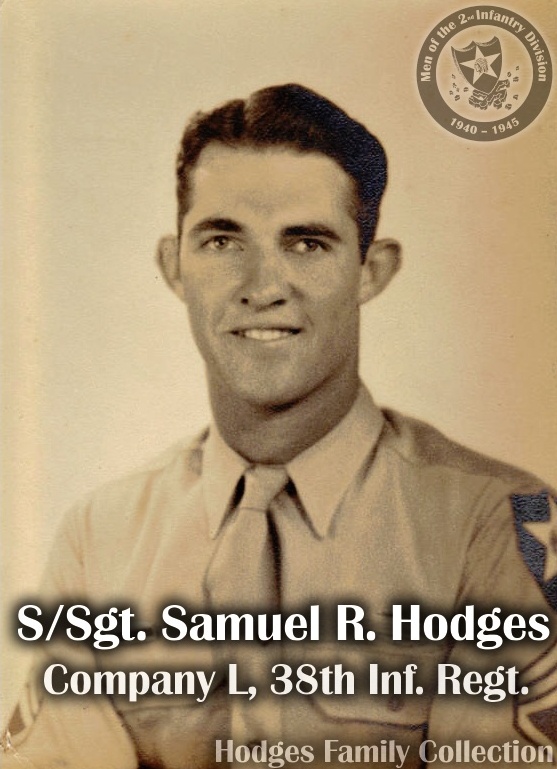 „…WE WERE TOLD TO GO BACK AND GUARD THE CROSSROADS LEADING INTO THE TOWN. WE QUICKLY RETREATED TO THE TOWN OF KRINKELT IN BELGIUM.“

“Lt. Bill Jones from Oklahoma was our Platoon Leader. He was a considerable distance out front leading the way. There were numerous tanks around the crossroads which he presumed were Americans. When he realized they were German tanks, it was too late for escape. We all learned a valuable lesson that day, don´t ever presume anything.

Lt. Jones hid behind a brick wall and watched as seven American soldiers lined up in front of a tank and were slaughtered. Then a lone soldier was lined up and shot. Hiding in an old well for a long period of time proved useless. Later that day, Lt. Jones was captured by infantry soldiers. Some wanted to shoot him on the spot, but thankfully, the leader would not permit it.

We moved into houses in the town. It was our job to guard the Division HQ. Three German tanks came out in a field just in front of the house we occupied. George Hudson and I were upstairs at the time. One soldier slipped out of the tank and Hudson decided to kill him. When the shot rang out, one of the big tanks turned his guns towards our house. We started to run for the cellar. The first shot went completely through the house. Luckily, we made it to the cellar before the second shot.

Kelly Steele was a guard at the front window and was knocked out by the first shell. We called for some artillery. Now, there was so much artillery exploding in front of us and some even behind us. It sounded like music to our ears and the noise drove the tanks away.

Later that night, three of us hid behind some bushes along the street in case a tank should return. Sure enough, a big panzer tank came crawling down the street. We shot at it with a bazooka. However, we didn´t know how much damage was done. Needless to say, it never returned. Our artillery showered around us all night long. This helped to keep the Germans back.

This is what is so amazing. We were surrounded. The Germans were attacking on both sides. Yet, for some unknown reason they never attacked us! We had been told to never surrender because the Germans were executing all the prisoners,“ memories of S/Sgt. Samuel R. Hodges, a member of Company L, 38th Infantry Regiment.

Exhausted, outnumbered and out of ammunition, men of the 38th Infantry Regiment, 2nd Engineer Combat Battalion and attached units together with invaluable help of the Artillery managed to hold their defensive positions in Krinkelt-Rocherath and repel the German armored and infantry attacks for three days and two nights. It was a horrific house-to-house fighting and each night the German tanks were crawling in the streets in effort to seize the ruins of these twin villages, Krinkelt-Rocherath.

Thanks to the successful defensive operations during December 17-19, the 2nd and 99th Infantry Divisions gained enough time to build a strong defensive line on Elsenborn Ridge, which had become impenetrable for German troops. The German offensive in the northern sector of the front was stopped in the first days of the Battle of the Bulge, when the Germans encountered a hard wall formed by men of the 2nd Infantry Division, 99th Infantry Division and the attached units.

We honor their memory!