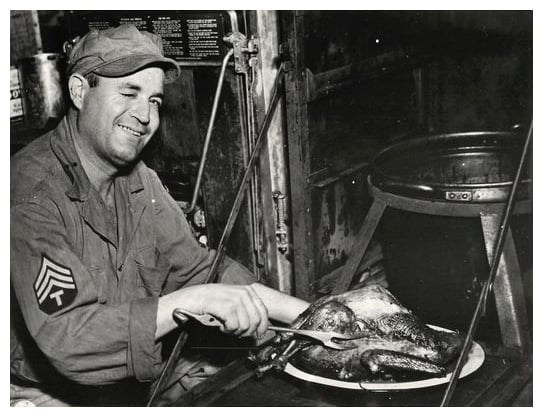 On behalf of our project team we want to wish you all a very Happy Thanksgiving. Would you like to know how did the men of the 2nd Infantry Division celebrate Thanksgiving Day in 1944?

November 23, 1944, about 10,000 yards North of Habscheid, Germany – „One more Thanksgiving. Is the third or fourth away from home for most of the Troopers, and they don´t know if they have much to be thankful for or not. The men are thinking about next year, and the chances on them being home, they figure, are even. The cooks put out a damn good dinner. Plenty of turkey, which was the main dish, and all the trimmings from cranberry sauce to hard candy, and with enough of the great American bird left over for supper. The commander broke open his liquor ration. Two bottles of champagne, and Lt. Fooshee broke out with a bottle of VAT 69, which is good enough for anyone. Lt. Meyer is in charge of a nine man combat patrol going out tonight. They will move to position about 1700 yards South of the CP and establish an ambush along a road where a junction is made with the dragons teeth, and will return to CP at 0100 hours. Mission is to get or capture enemy patrols, and to report all enemy activity in that area. Started to rain just before the patrol pulled out, which makes it just great,“ 1st Sgt. Daniel Caffery, 2nd Reconnaissance Troop, 2nd Infantry Division.