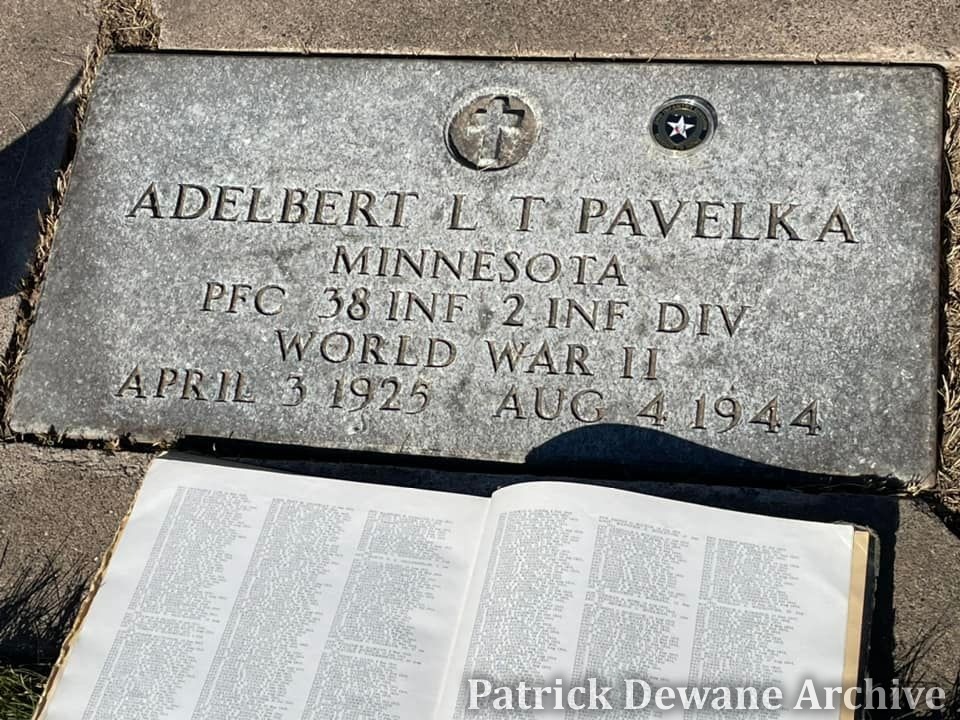 An exceptional event took place on August 4, 2022 at Saint Joseph Catholic Cemetery in Beroun, Pine County, Minnesota! In July 2022, we contacted our friend and colleague, Patrick Dewane, and brought the story of PFC Adelbert “Del” Pavelka to his attention. Patrick did not wait a minute and he began to prepare a special ceremony to honor the memory of Del Pavelka who was killed in action 78 years ago, on August 4, 1944 near Vire, France. As we informed in our last post, PFC Adelbert Pavelka was a member of Company B, 38th Infantry Regiment.

Patrick even managed to locate and contact Del´s nephew Ralph and his family who were really excited about our interest. The heroic story of Del Pavelka also made it to the local newspaper! The Pavelka family originally came from Bohemia, a part of the Austro-Hungarian Empire (now the Czech Republic) as well as Patrick’s family. So on this occasion Patrick brought many meaningful mementoes related to the 2nd Infantry Division from his travels to the Czech Republic.

As Patrick informed: “Over 30 people were at Del Pavelka’s grave on the 78th Anniversary of his death in combat in World War Two. Many Pavelka family members were there, as were veterans, media, friends, and a Bohemian trumpeter playing taps. Del’s nephew, Ralph, read from a book that described the heroic circumstances of his death. It was so successful we will do it again next year, and you are invited.”

Thank you for your service, PFC Adelbert Pavelka! We will always remember you and honor your memory!

Our special thanks belong to our friend Patrick Dewane for making this ceremony happen!