„The Day I Lost My Best Friend“ by S/Sgt. Fred Randall 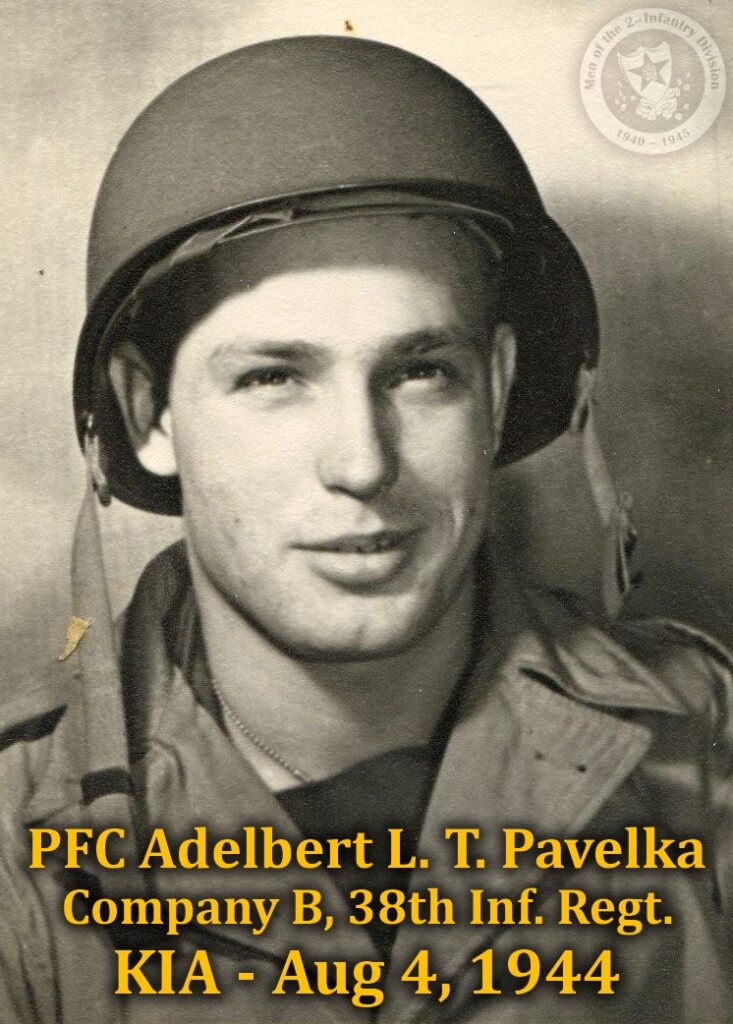 S/Sgt. Fred Randall and PFC Adelbert „Del“ Pavelka were inseparable friends serving in Company B, 38th Infantry Regiment. They promised to cover each other’s backs in any situation. However, on August 4, 1944 PFC Adelbert Pavelka was killed in action near Vire in France. The day, which his friend Fred Randall carried with himself for the rest of his life.

„Flames broke out as our tank ahead of us took a direct hit from an unseen German 88-artillery piece camouflaged on the Normandy hillside ahead. We crouched behind the hedgerow as a second round went over our head and exploded behind. The tank crew were trying to escape the burning vehicle, but a machine gun in the hedgerow directly ahead made it impossible. ‘Let’s go, Randy.’ Del shouted, ‘We´ve got to help those guys.’ It was a dangerous move and we both knew it. But it was typical Del who was always taking risks to help others.

‘Cover us, guys,’ I yelled to our squad as we slithered over the hedgerow. In spite of the smoke and bullets ricocheting around, we were able to get one of the crew out through the escape hatch, only to find we were too late to save him. A third shell hit the tank, and I was immediately engulfed in some kind of brown sulfurous smoke that was choking me. While trying to crawl away from the fumes that were making it almost impossible to breathe, I must have gotten in the line of fire, because suddenly I felt a searing jolt in my neck that sent me sprawling from behind the tank. Seeing I was hit, Del crawled over, dragged me back to cover and managed to get a bandage around the wound to stop the bleeding. ‘Don´t worry, Randy, I´ll get you out of here.’

He did, too. And to this day I don´t know how because everything suddenly blurred. When my head cleared, I was behind another hedgerow with a medic dressing my wound. He told me Del had carried me back and had just left to rejoin the platoon after being assured I would be okay. It was to be the last time I would see my best friend alive.

Ten days later I left the field hospital, my neck wound being fairly healed, and my lungs, though still sore from coughing, seemingly back to normal. Hopping for a ride on an ambulance heading toward the front some miles ahead I soon noticed the driver slowing down as we saw – and heard – all signs of a major battle in progress. Picking up ammo and a rifle I headed to an area near the front where my platoon was supposed to be. Casualties were being brought back to a temporary aid station set up in a sunken round behind our lines. Obviously we had many, and I had a sinking feeling as I went looking for Del.

When I finally found him among a group of casualties, a graves registration team had already recorded his dog tags and were waiting for dark to move the bodies back. I was too late, so I just sat down beside him, my helmet at my feet, for what seemed forever until finally they came and took him and the others away. I can remember being completely exhausted and drained of all emotion. But I can also remember having an overwhelming determination to exact full payment for Del´s death.“

PFC Adelbert Pavelka was only 19 years old when he was killed in action on August 4, 1944. His death caused a huge blow in the hearts of those who knew Del and especially those who loved him. Del´s parents were completely devastated by the news.

PFC Adelbert Pavelka is buried at Saint Joseph Catholic Cemetery in Beroun, Pine County, Minnesota. Thank you for your service Del, we will never forget you!!