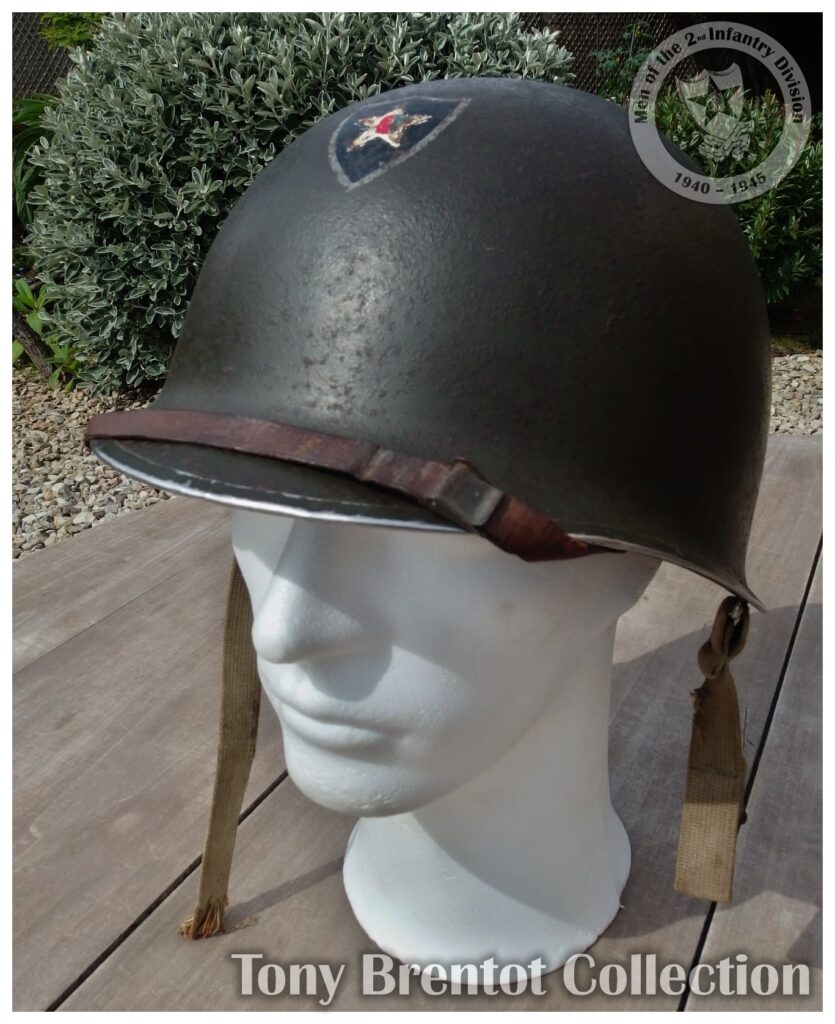 We are pleased to present you the story of this wonderful M1 helmet with the insignia of the 2nd Infantry Division! This helmet was found in France several years ago and was purchased by a French historian, Tony Brentot. After a few years of intense research, Tony uncovered the unique story of the helmet and its original owner, T/5 Raymond H. Conner, a member of Company A, 2nd Engineer Combat Battalion, 2nd Infantry Division.

Raymond H. Conner was born on January 22, 1920 in Corpus Christi, Nueves County, Texas. His parents owned the family farm. After a first year spent in high school Raymond decided to join the Army. Raymond enlisted on October 23, 1940 and he was sent to Fort Sam Houston, San Antonio, Texas, where he was assigned to Company A, 2nd Engineer Combat Battalion, 2nd Infantry Division.

On June 7, 1944, after almost three years and six months of intensive training, field maneuvers and preparations, Raymond, now a Jeep driver, and Company A landed in Vierville-sur-Mer, Normandy. Shortly after landing on Omaha Beach, the 2nd Engineer Combat Battalion was used as regular infantry, fighting courageously on the northern slope of Hill 192 between June 16 and June 22. Then, the engineers resumed their usual duties. In the Bérigny area, they began to perform their main tasks, which included the construction of command posts dugouts and showers, reconnaissance of roads and bridges, clearing roads with bulldozers, filling road craters, defusing bombs or removing booby traps and guarding the road blocks.

But how did Raymond lose his helmet? After compiling the Morning Reports for Company A, Tony came to the conclusion that Raymond most likely lost his helmet on July 29, 1944, near the town of Saint-Jean-des-Baisants. That day, Raymond’s unit was supporting the 9th Infantry Regiment, removing mines in the Regiment sector, when Raymond suffered from acute appendicitis. „Raymond managed to get to the clearing station and he was waiting to be transferred to the 5th Evacuation Hospital, when the area was suddenly shelled by enemy mortars. Raymond was left behind until Sgt. Albert J. Perseo came back to pick him up. It is likely at this moment of great confusion that Raymond´s helmet was left behind,“ stated Tony Brentot.

Raymond was sent for treatment to England. After a few weeks in the hospital, he returned back and remained with his Company A until the end of war. After returning home, Raymond married the love of his life, Mrs. Rita L. Martinez on November 7, 1945 and they had three children. Raymond H. Conner died prematurely as a result of lung illness on November 1, 1971 in the Veteran Administration Hospital in Kerrville, Texas. He was 51 years old.

Thank you very much for your service, T/5 Raymond H. Conner. We honor your memory and will never forget!

Special thanks belong to Tony Brentot and Mrs. Carol Vogel, daughter of Raymond Conner, for sharing the unique story of Raymond and his combat helmet!